As if I wasn’t enough of a nerd, I store my two favorite collections (my Fluevogs and my amassed J. R. R. Tolkien reference library) in the same place.

The Children of Húrin (hardback)

The Lord of the Rings

The Lord of the Rings (leather-cover)

The Tolkien Reader (Ballantine Books compilation, 1st edition 1966) – it’s not worth anything but it was a cool thrift-shop find!

The Complete Tolkien Companion  (by J. E. A. Tyler)

…not that I’m a nerd or anything. I also own a couple of LotR related art books, including one that is an atlas, but I packed them away “to be safe” when I moved up to Seattle from California and still have some boxes which have not been unpacked – and I moved in 2012.

Let’s move on to the fashion-y part! 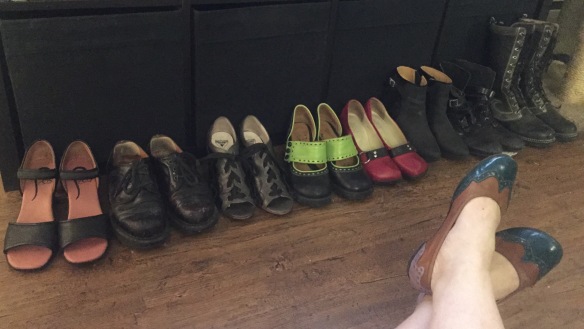 I have a Fluevog “problem.” At this point I’ve managed to replace most of my other shoes with Fluevogs, because I’d rather own fewer shoes of higher quality than more that will fall apart. But now I have more Fluevogs than I had regular shoes… And I neeeeeeeed mooooooooore. I buy them pre-owned on the cheap and on sale – I don’t have the money to purchase new.

You can’t see my Defender boots in this picture because I wrecked them at Burning Man and I haven’t had a chance to clean and condition.

Hey everyone! Kristin here. While I was gone, I dyed my hair pink and got a tattoo. I am no longer gone so the Kristin-related updates (including a retrospective of what I’ve been doing) will resume soon. But here are my two favorite things I’ve done while I was gone. 😀

Hair: Special FX “Virgin Rose.” I do it myself, including cutting it, lately.

Left picture, or: Regarding my tattoo:

It is written Quenya, a dialect of JRR Tolkien’s elvish. It is a quote (part of a longer passage) from The Silmarillion, which is my favorite book.

In English: “The deeds that we shall do shall be the matter of song.”